Petpals Franchise Receives letter of thanks from Mayor!

David and SallyAnn Gray, owners of Petpals Darlington have received a letter from the Mayor of Darlington, congratulating them on reaching the finals of the Pet Industry Federation awards and for their ongoing work caring for dogs in the local Darlington community. 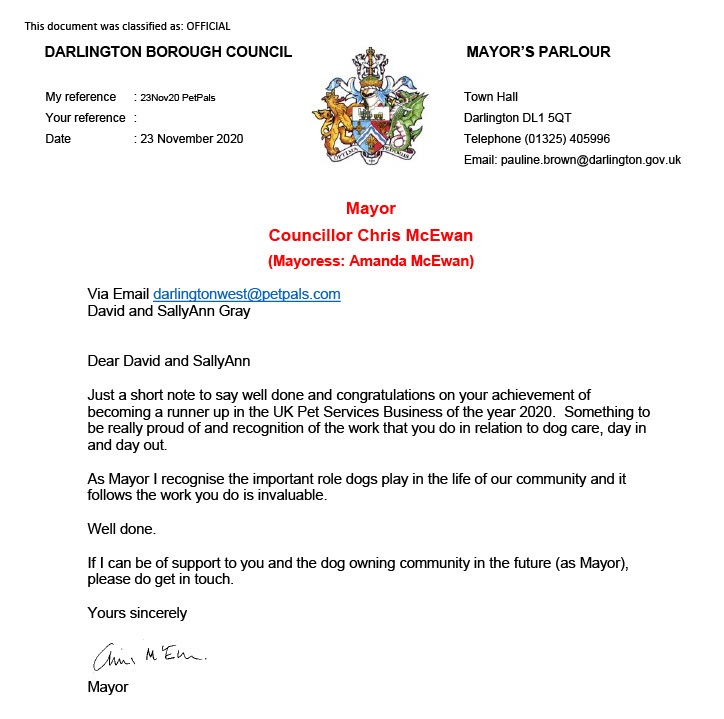 Breaching a PSPO also has the potential to leave the alleged offender with a criminal record, crucially, without redress through the criminal justice system. 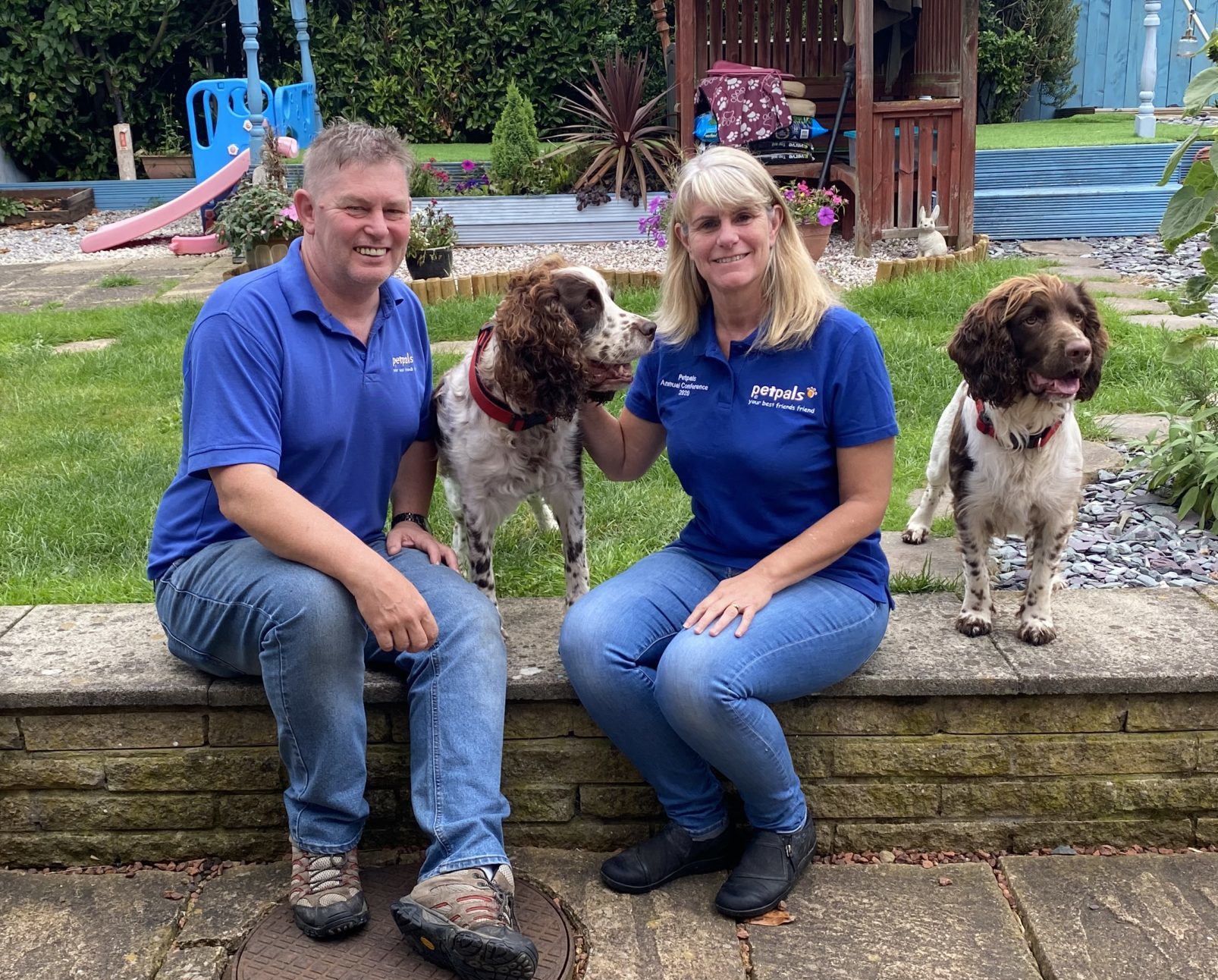 David Gray (58) who has run Petpals Darlington with wife SallyAnn (54) since 2006, was unhappy with the potentially draconian measures and objected to their introduction at a public council meeting. Following the meeting David joined forces with other attending dog-related business owners, to lobby the council for a more measured approach to the rules, suggesting that a collaborative approach would achieve more than penalising the public.

After lengthy discussions with the council and support from local MP Peter Gibson, as well as animal charities such as the Kennel Club, David and his team formed the Darlington Responsible Dog Owners Action Group who presented their first plan of action to the council recently. Each member of the group will also sign up to a ‘Responsible Dog Business Owner’ charter with a similar version being produced for individual dog owners.

The group’s strategy is expected to tackle the subjects of dog fouling, the location of dog waste bins, maps educating the public where they can and can’t walk their dogs and bad behaviour in dogs whilst out on walks etc. The group also has plans to take their ‘Responsible Dog Ownership’ message into schools and community settings, as well as providing an educational programme for the dog owning and non-dog owning public.

Support from The Kennel Club

‘The Kennel Club has been very happy to provide support and advice to the Darlington Responsible Dog Owners Action Group. We have long held concerns regarding the use of blanket restrictions imposed by PSPOs – which often have limited effect on addressing the irresponsible minority who fail to pick up after their dog or keep them under control, whilst penalising responsible dog owners.’

‘SallyAnn and I are delighted to have received this letter from Councillor Chris McEwan and we thank him for his kind words. We have lived in Darlington for 40 years bringing up 4 children and now 2 grand children here, so it is an honour to be recognised in this way.’

‘As a business, we employ 22 people who walk dogs and visit cats and other small furry pets in the area, resulting in approximately 20,000 walks a year, so we naturally have a vested interest in addressing the issue of PSPO’s.  It has been a long journey to get to this point, but we are convinced that this joint approach from the dog owning community and Darlington Borough Council is the best way forwards, benefitting us all in the long term. There are definitely issues that need tackling including dog fouling and badly behaved dogs, which will be receiving our full focus in the coming months.’

Giving advice to other dog walking businesses across the United Kingdom David said,

‘The only way to tackle the issue of PSPO’s is to work with your local authority to find a tempered response that educates and empowers, rather than frightens and fines. This is a great opportunity for you to reach out to your council and work together, for the good of all residents and dog related businesses.’

‘Every single one of our 50+  franchise owners will be facing this issue with their local councils and we are delighted that David is not only spearheading a new approach in Darlington, but also that he can share his knowledge with the rest of our network as the group progresses. As the largest multi-service pet-care franchise business in the UK, we walk thousands of dogs a year and look forward to working closely with more local authorities across the country, to ensure responsible dog walking and ownership for all.’

Petpals has over 50 operations covering most of the United Kingdom. If you would like to know more about buying your own Petpals franchise. please click here for more information about how to make your dream of working with animals, come true. 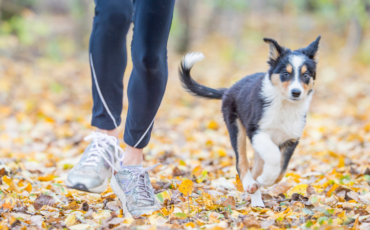 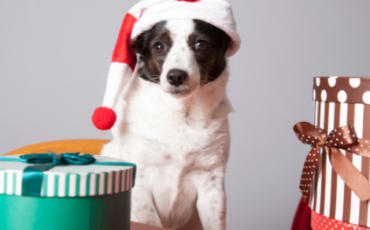 10 ways to spoil your pet this Christmas 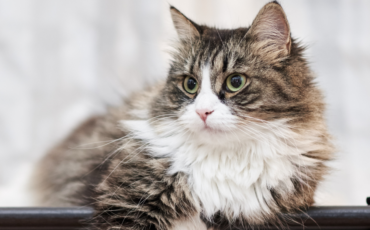 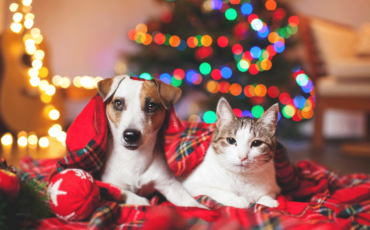 Keeping your pets safe and happy this festive season 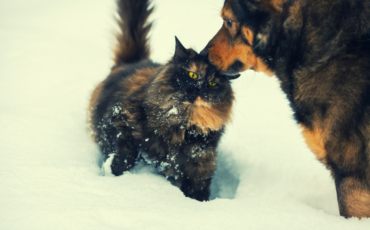 Caring for pets during the winter 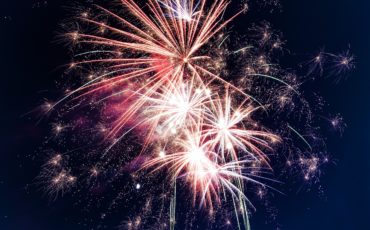 Five top tips for caring for your pet this Bonfire Night 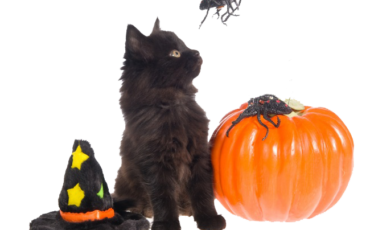 Autumn celebrations can be a scary time for your pets 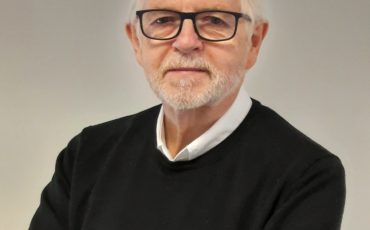 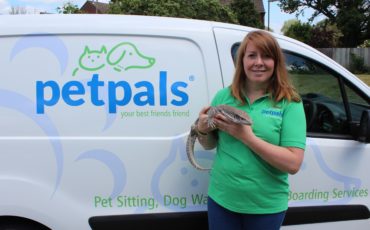 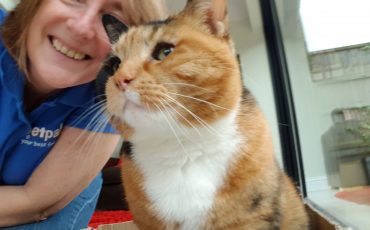 Signs your Cats are getting Older 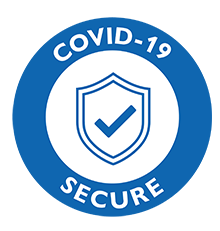